There will be 5 unique bonuses which will be determined by the Box selected from the What's In Your Box? Bonus.

Go All The Way Bonus

After a short transition, a studio scene will be shown with three DOND boxes in the centre and two cash ladders on the left (blue) and right (red) of the screen.

After a short screen transition the player will be presented with a secondary bonus screen that is themed around the DOND studio with a trail board in the centre.

The bonus shall be split into two stages; Stage 1 is a regular board and stage 2 is the Big Money Super Trail Of Wealth Board.

The player always begins in stage 1 and is required to roll the dice to advance around the board collecting Total Bet multipliers, Banker's Seals and Mystery Wins. Landing on the phone awards the Banker's Bonus, where the Banker's Spin can award a current Total Win multiplier, Walk of Wealth where you move around the board once collecting prizes,a Mystery Bonus Prize as well as Banker's Seal or even Super Trail Of Wealth. Collecting 3 Banker's Seals triggers the Super Trail Of Wealth, which changes the board to contain Super Multipliers as well as Mystery Positions, Mystery Win boxes and Banker's Bonus positions. The feature continues until the player reveals COLLECT from the Mystery position, where the player exits the feature with the amount displayed in the Bonus Winnings panel.

A screen transition will occur and the player will be taken to a new set of reels and awarded 10 Free Spins.

Across the top of the screen a panel will be shown with 3 Banker's Seal positions along with a symbol that can become the DOND symbol if the panel is completed. During the Free Spins a Banker's Seal overlay can appear on any symbol on reel 5. If the player accumulates 3 Seals during their spins, then the symbol shown above the reels is changed into a DOND symbol, with the player awarded 5 additional spins.

The player can turn up to 4 symbols into the DOND symbol.

Free Spins continue until all spins are used where the player is awarded the amount displayed in Bonus Winnings. Seal of Success cannot be retriggered during the Bonus Additional free spins are awarded each time the player completes a Banker's Seal Panel.

Deal Or No Deal Bonus

After a short screen transition the player will be presented with the Deal Or No Deal Studio.

Choose your lucky box then play a real game of Deal or No Deal against our banker for a chance to win up to x2500 times your total bet!. At the end of every round he will make you an offer and it is up to you to Deal or No Deal? Play until the end and the Banker may offer you a swap. Is it worth the gamble for the chance to win big?

Whenever a Feature win is achieved in the game, the player has the option to either Deal (collect the feature) or No Deal (gamble) to try and win one of the other features in the game (except for the Deal Or No Deal Bonus which is automatically awarded).

The player will be presented with a Gamble screen showing the 5 features from left to right, ranked in terms of average payout. The feature the player has achieved will be highlighted.

The player chooses from one of the two boxes shown onscreen. If the player gambles and win, the feature they have gambled to can be collected (Deal), with all features below that now eliminated. This continues until the player collects, reached the top feature (where it awards that feature) or the player reveals Mystery Prize – where they are then awarded a mystery cash prize (a multiplier of the Total Bet). 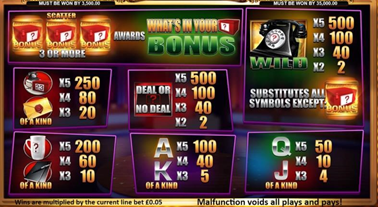 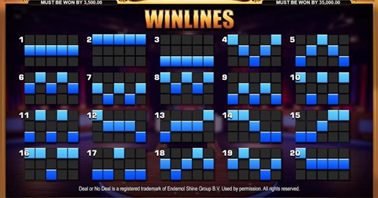 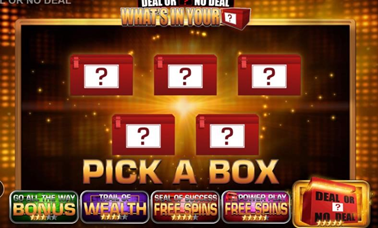 Go All The Way Bonus 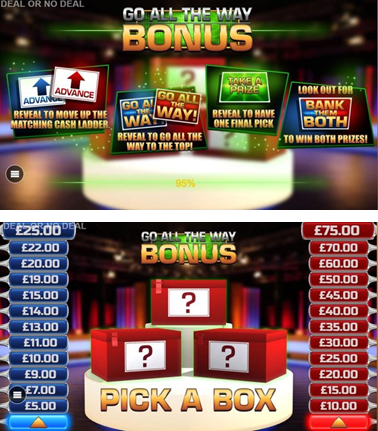 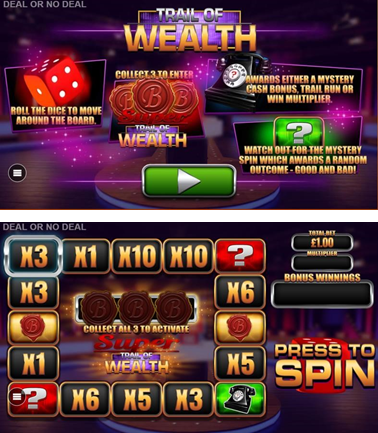 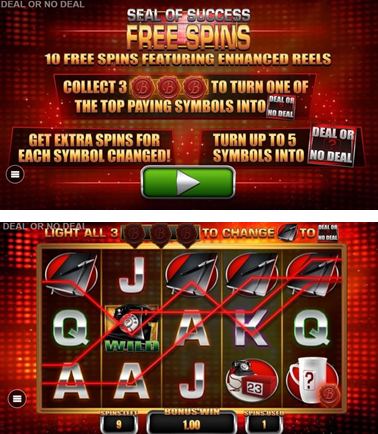 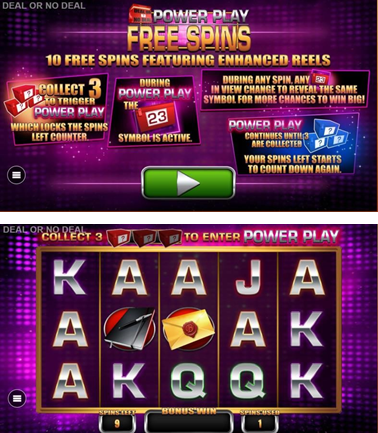 Deal or No Deal Bonus 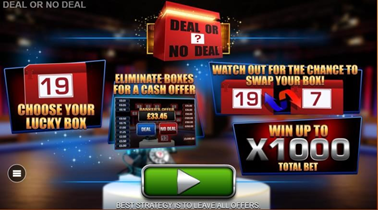 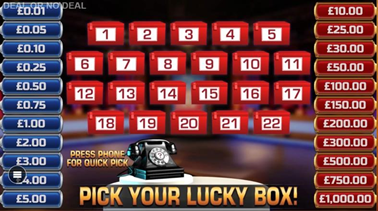