Stoppa: This causes a stoppa, highlighting different locations around the board and wherever it lands is awarded to the player. Boost: This boosts the player further down the trail. Super Board: The player is taken directly into the Super Board. Win Spin: The reels spin to a prize.

Triggering the SUPER BOARD Trail will initiate the top game. From this point a series of Features and Cash prizes can be won by moving around the board dictated to by the number in the middle of the board.

The Trail Bonus awards one of the following:

Feature+: Increases the feature board on the left. Cash+: Increases the cash board on the right. Free Spin: Awards an additional Free Spin. Winnings are put into the cashpot. Arrow: Moves the player to the inside of the board. Phone: Collect three or more to Enter the Deal or No Deal Bonus. Heart: Collect three to award an extra life. Cash Out: Forces the player out of the Trail Bonus with a dapple which awards a prize or lose. Multiplier: A multiplier of stake is put into the cashpot. Bonus: Awards a Bonus. Mystery: Awards a Stoppa, Cash Out or Heart.

CASH COMBO - All the values dapple on the cash ladder. The player presses start to stop the dapple and is awarded the corresponding prize. A repeat YES/NO is then awarded, if yes another cash value is awarded.

CRAZY CASH - 3 Shots given to climb the cash ladder.

HOT SHOT - A random dapple across the blue DOND boxes. The player presses spin to stop the dapple and wins the corresponding prize. A repeat YES/No will be given on the win. 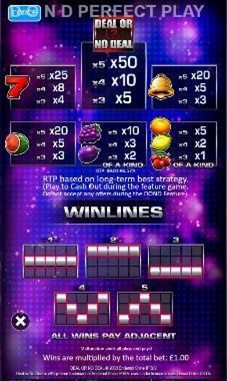